Super day on the Bay

Hi all.
We got up way to early for me and were set up and fishing by about 09:10. We went out of Old Cut after stopping by Jimmy's for one scoop of his finest. His wife said they had moved everything in close so that is where we went. .8 of a KM straight out in 3.5 feet of water right in the weeds. I said to number 1 that we would fish for an hour and then move. At 10:00 I was going to shut the heater off when some fish came by and we managed 7. We kept the biggest seven thowing them onto the ice outside. Once the thrill was over I looked outside and was embarassed thinking they were six inchers, but thinking we at least had an appetiser. The fish came 3 to 4 at a time after that with some jumbos sliding by without a bite because the smaller ones, ( 10 inchers ) would get the bait first. By 12:30 we could have have walked away calling it a great day but there was more to come. I started jigging a little silver and blue spoon every ten to 15 minutes which seemed to bring in 10 to 15 Perch, some small and some big. There would be a flurry of action for 2 to 3 minutes producing 2 good ones each time. On several occasions we had to go to one rod each as the tangles got ugly. I missed one huge one that hung around for about 5 minutes and she was trying to get the jigging spoon but kept missing it, ( my guess she was blind ).
We had to leave by 14:00 so we relinquished our holes and what little bait we had left to a guy fishing by himself as well as wishing him good luck. I gave him my card and asked that he tell me how he did. I will report if he sends me a message.
We fished with bobbers and modified Pickeral Rigs using minnows cut in half. The jigging spoon seemed to be a good way to get them into the area but the bait did the hard work.
We kept 32 fish and I am attaching two pictures. There were 17 small ones from 7.5 to 8.5 inches with most around 8. The bigs ones were from 9.5 inches to 11.5 inches with three of them right on 11.5 inches. Most from this group were just over 10.
We also threw back well over 100 fish quite a few in the 8 inch range as I started thinking about the cleaning aspect of the operation.
What a day on the Bay. 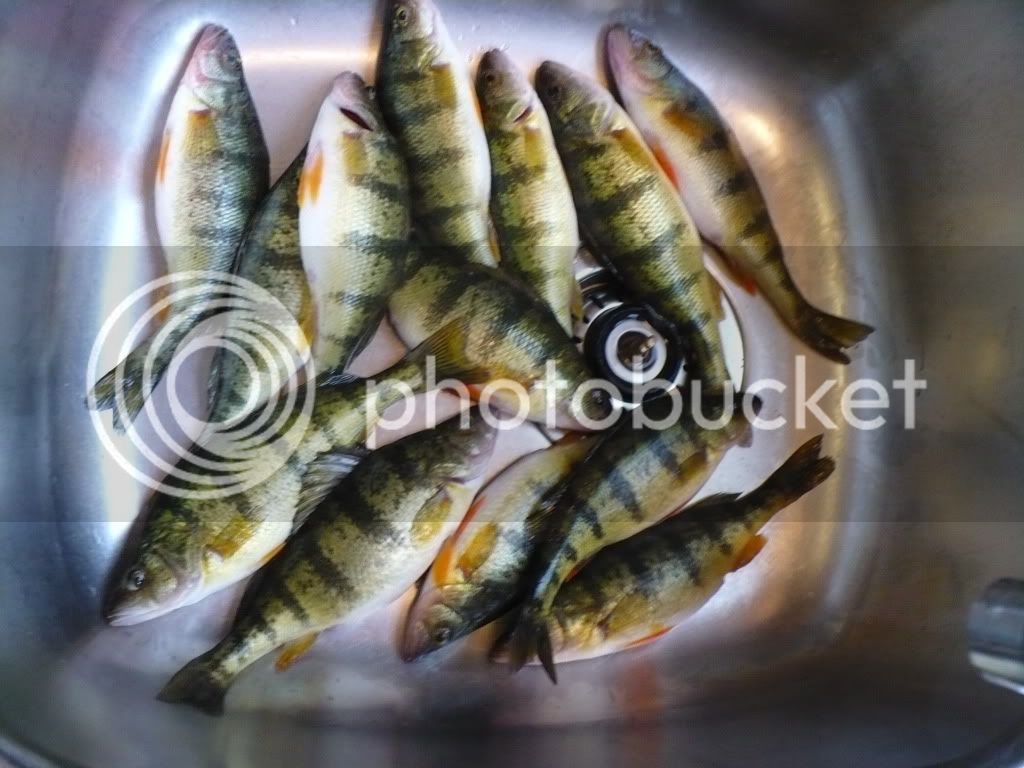 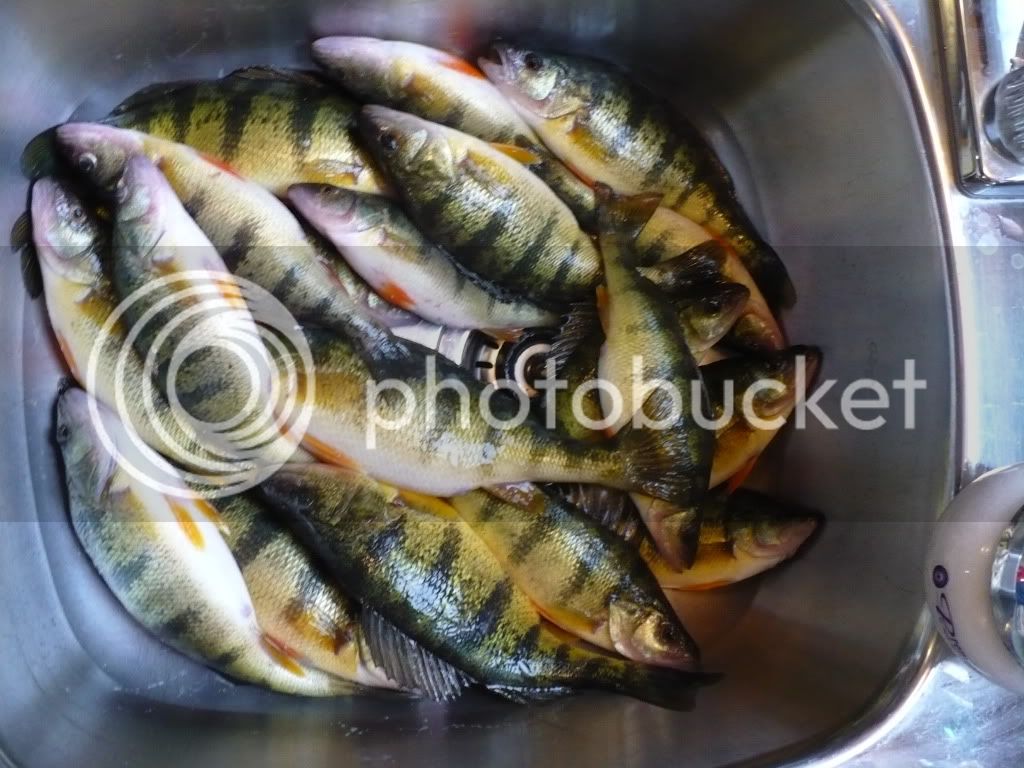 Hi all.
Jason B I am hoping to get out about 15:00 after I blow the neighborhood out.

Further report from Steve who is the guy that fished our holes after we left. It shut down almost right away after we left however he had a huge Pike break his line so that makes sense.
Cheers, Clark

Congrats on the catch! Was wondering what the ice thickness was like?

Hi all.
Karpfarmer.
We were only out .8 of a km but the ice was about 8 inches of clear blue with 3 inches of slush ice on top. The slush ice was banging and cracking all day.
cHEERS, cLARK

R.O.C. (Radio Operator's Certificate)
Walleye,Thank-You for posting.I always enjoy reading them,it is good to keep Anglers updated on the whereabouts of the Perch,(.8 of a KM straight out in 3.5 fow,out from the Old Cut).It can at times,become a real guessing game,when a person gets out on that Big Ice.Good Luck on your Future Outings.

Was out on Sunday in same area. Had the portable frabill out for the first time with my boy and we managed 9 keepers but there were huts that caught much more. Everywhere I augered there was the same amount of ice (8 inches of blue and 3 of hard packed slush ice). Caught on small willliams wobbler spoons, silver with red stripe and minnows from Rotten Ronnies.