Sorry for the late report, but we hit Burwell again on saturday for some eye's and bow's. Afternoon fish, so number's weren't going to be high, but we did put some fish in the boat. Started out in 62fow, infront of sand hills about 12 miles out. Had quite a few gas wells out there so we did the figure eight around them and within the first 10min. we had our first eye in the boat. After that the waiting/lure changing and depth changing began. After a bit we hit a "double bow", well I think that's what ya call it when you got one bow on the main line and one bow on the cheater line:0. Pulling those two crazy bugger's in, was like leading a horse by the tail.....lol. Well you can guess, the one on the cheater became unpinned about 20 feet back, but it sure was a good fight while it lasted. After that we dropped two more bow's, one of which lost his bottom jaw, which I had on the treble, man was he ever pissed, jumping a good five feet out of the water. We did however get another bow and eye in the net and lost an eye. Grant total for the afternoon....2 eye's, 2 bow's and a bottom jaw bone..lol. The bow's were coming off the rigger's set 45ft down, BPW DWss and I think it's dill pickle(green/black dots) DWss. The eye's came on dipsey 120 back/setting 3/chrt wormharness and hotlips watermelon off the boards. Back at the ramp I heard a few coho salmon were caught, didn't think there were many around any more in erie. Here's the action. 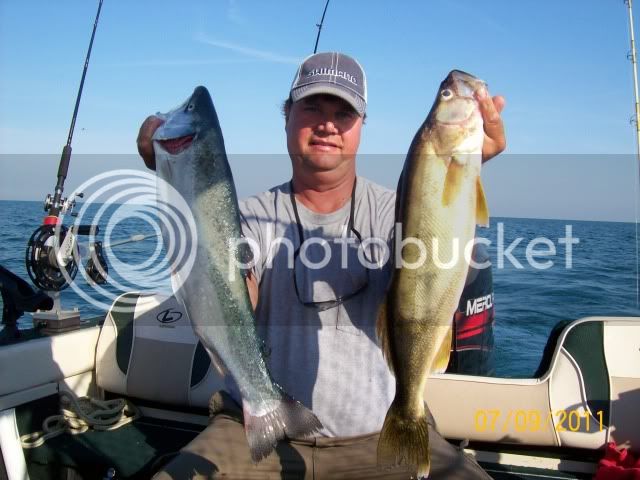 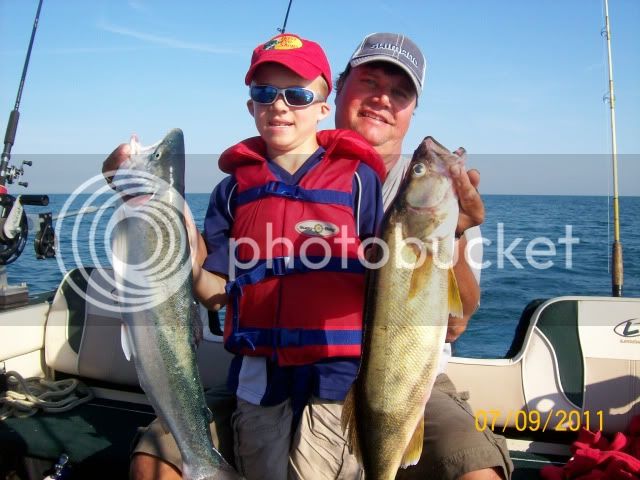 R.O.C. (Radio Operator's Certificate)
The water looks like a day I'd enjoy being out Brian. Nice catch...I heard some serious T-storms went through the area pre-dawn Friday and stirred things up. Albert and I plan to try for perch locally tomorrow. May fish Burwell later in the week if the weather cooperates. Thanks for the post....always interesting.
I

Good trip Brian.
You never give up my friend8D
Same time you were chasing the eyes and bows at Burwell....my neighbor and I were killing the Kings, Cohos and Bows on Lake O.
10 for 20 for the afternoon yesterday....yeah I know we were too generous ha ha ha

Arnie...they were asking about you

R.O.C. (Radio Operator's Certificate)
Thank-You also jumbos for the report on your day on the Lake.It sounds like you and your boy had a Wild time handling the "double Bow",something that personelly I never had happened to me,or heard of for a long time,from other Anglers.I love catching the Bows also,off the rigger`s/cheater lines,an awesome set-up.It is nice to know that there are Coho Salmon also in the mix--Bonus8D.I am looking forward to getting out this week,If the Winds are gentle.8D

icefisherman when you were out on lake O ,where abouts were you .
I used to live in Stony Creek ,always went out of fifty point .Not been down there inabout 5 years8D
I

icefisherman when you were out on lake O ,where abouts were you .
I used to live in Stony Creek ,always went out of fifty point .Not been down there inabout 5 years8D

Thanks icefisherman,hope to try this weekend

Nice work Brian, thanks for the report!