Local Action with the kids!

This report is a few days old, but I wanted to post it here as well as it's my "local" board.... Love all the reports coming in from burwell, but we only have a small boat so we make due and fish where and when we can!

Usually around this time of year I've caught my share of bass for a while and take some time to target carp. I asked Averie if she wanted to try for carp, or chuck around some baits for bass and gills while I did the carp thing. She's not one to sit still very long, but to my surprise she said she wanted to try for her first carp. So I took her to a spot that typically only holds 5 to 15 pounders but still wasn't sure if she, or her little 4.5 foot rod would be able to handle them. Last night I did some drag tests in the living room with her to see if she could handle having line peeled off and she seemed to do alright. So this morning, off we were, a late start at 9 a.m. but we were headed for some carp action!

On our way down the hill and through the bush, I managed to tangle my rod all to heck so while I was screwing around with that I set her up, and of course... she yell's FISH ON before I even get my line in the water!!! It was all her, I just grabbed the camera and snapped away while she fought her first ever carp, and by far her biggest fish to date like a pro!!! I was so proud!!! Luke watched and screamed for her to land it the whole time! lol 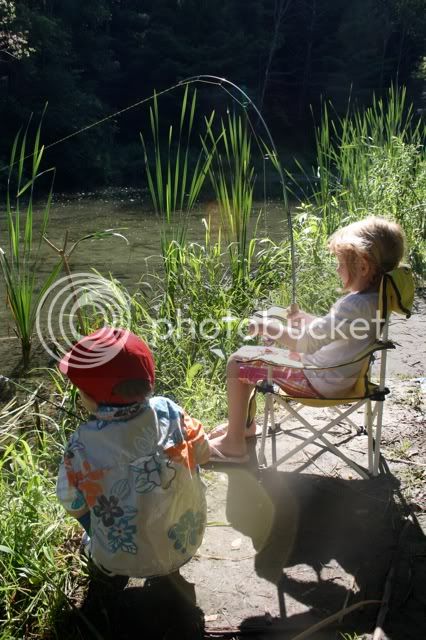 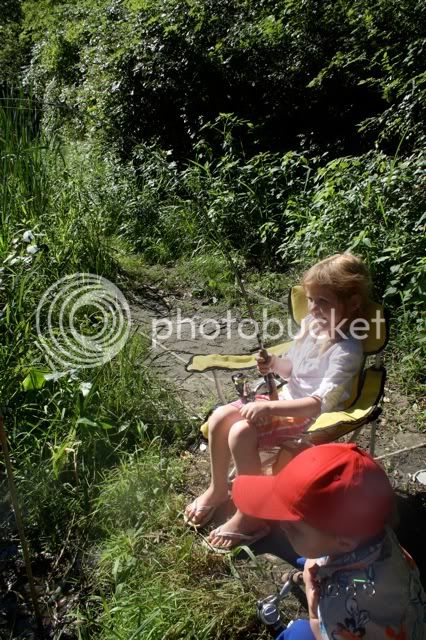 She worked it perfectly with her little 4.5 foot Voltaeus! 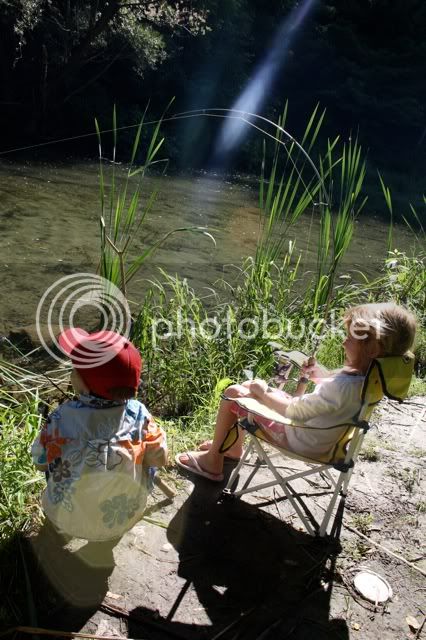 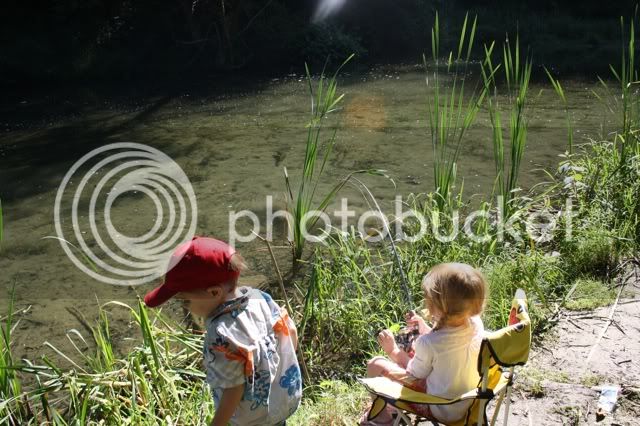 Check out the bed in that rod! lol 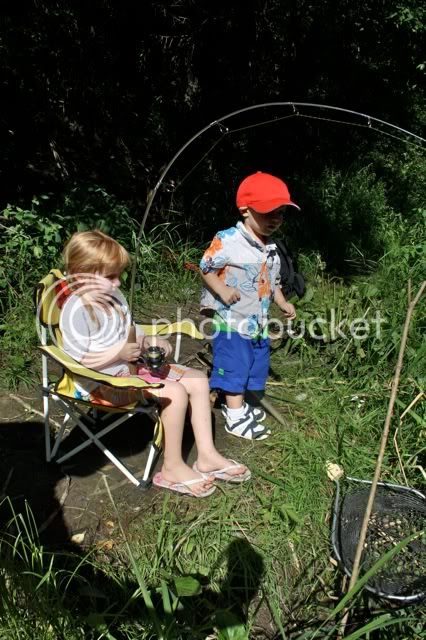 Finally after probably close to 10 minutes of her fighting the fish we had him in the net and realized he was missing an eye! 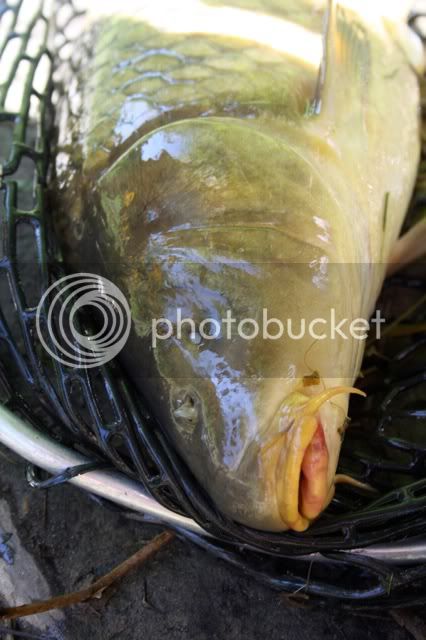 Here she is with her prized catch! 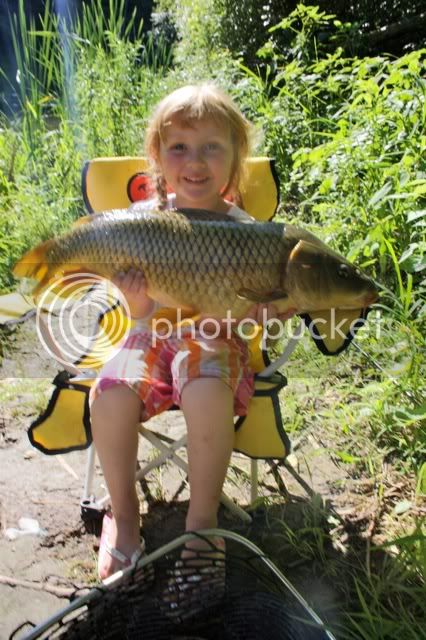 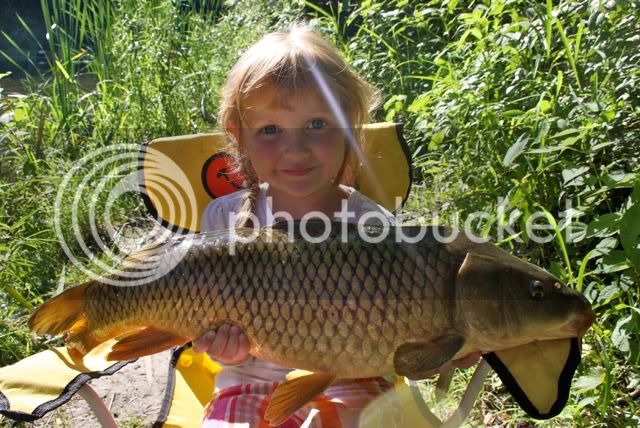 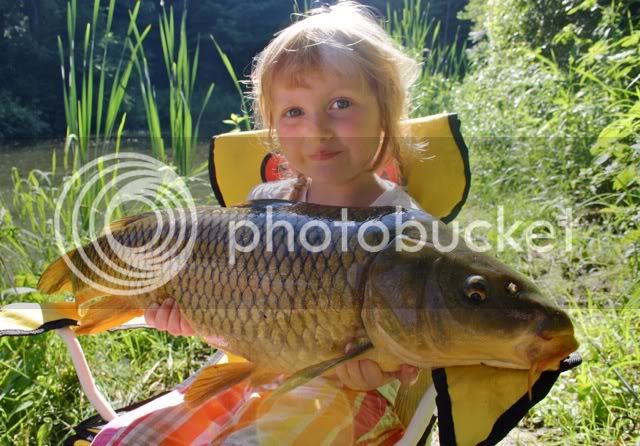 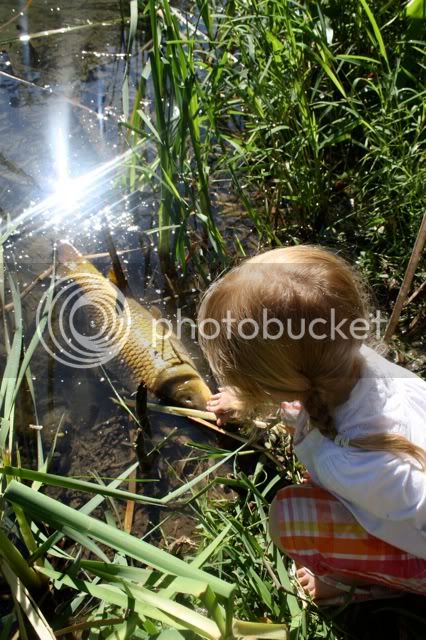 A few minutes later Averie's rod goes off again but she had a lap full of snacks so being the class act of a dad I am I pounced on her rod and punked her for her second fish of the morning! :w00t: 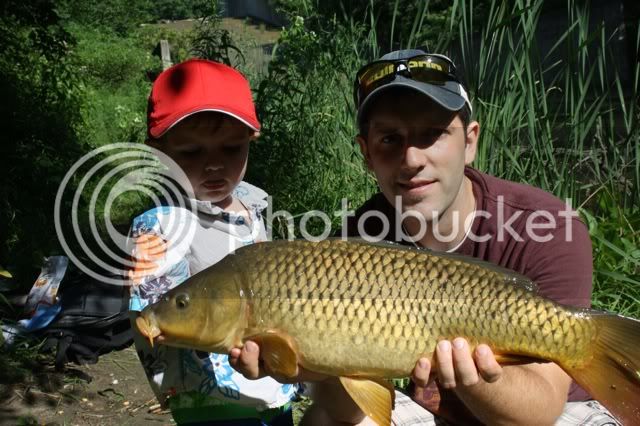 Once the sun got up high the carp bite died right down... we had a few bumps but missed them... I toughed it out but Averie switched modes....she managed a mixed bag of fish and a new PERSONAL BEST largie... man did she ever whop on me today! lol 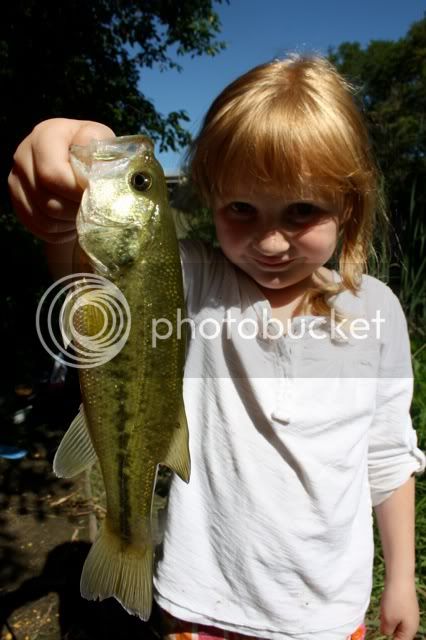 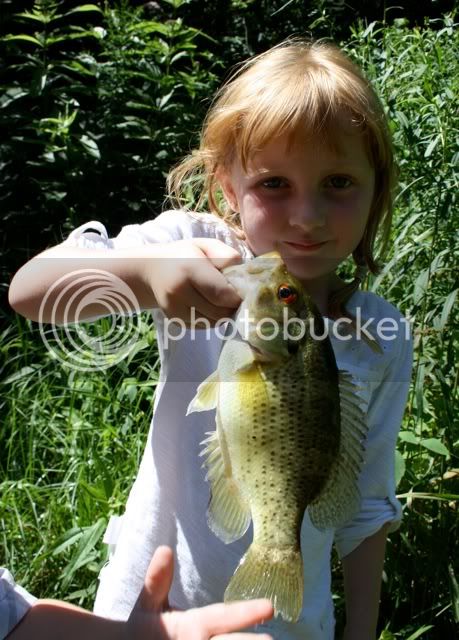 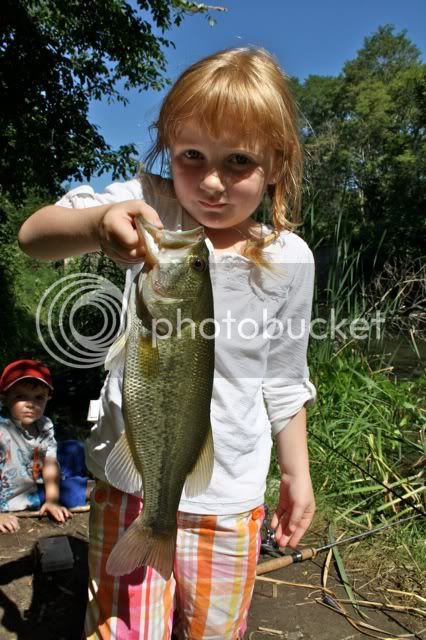 luke holding one of his sisters fish... lol 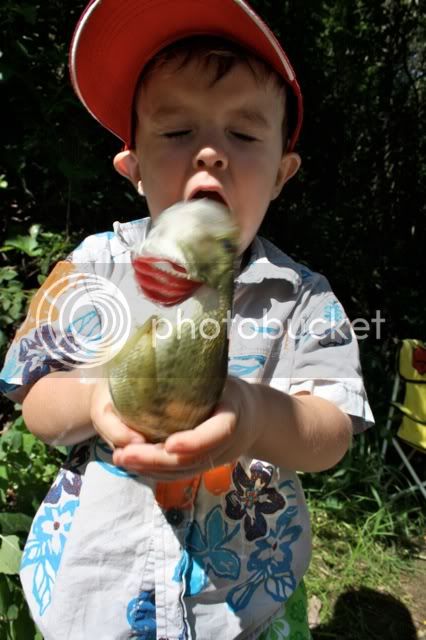 After that he wouldn't hold his own fish... 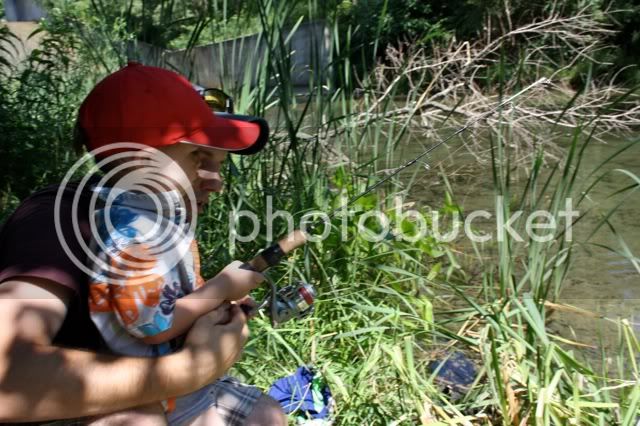 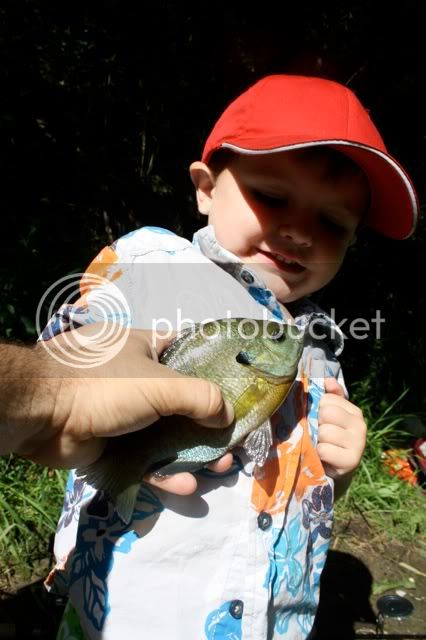 This was the closest we could get of him holding his own fish... lol 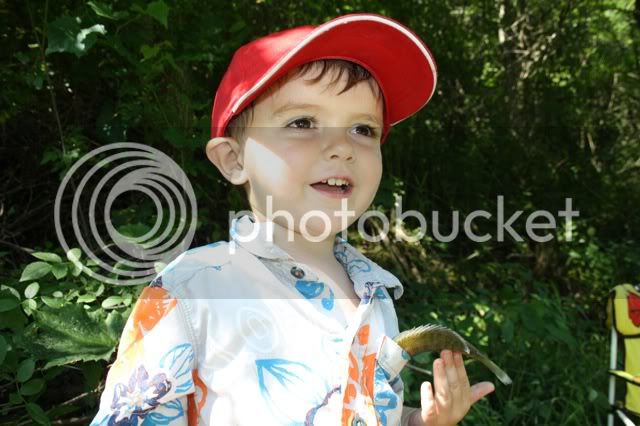 feeling like a broken man I had to at least catch one fish on my own rod before I left... and here it is! lol 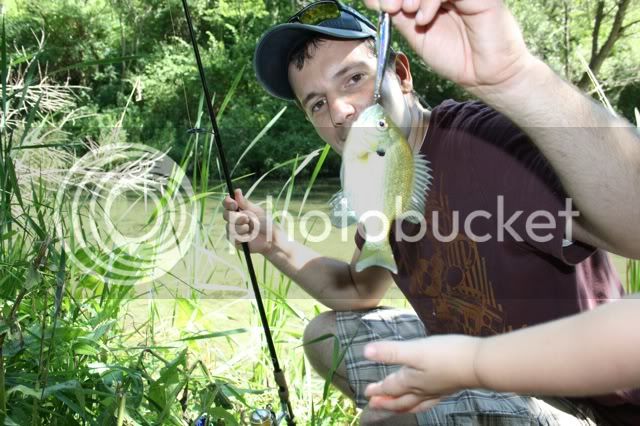 Averie on the other hand had her first case of Bass Thumb!! wasnt' a problem for me today.. :wallbash: 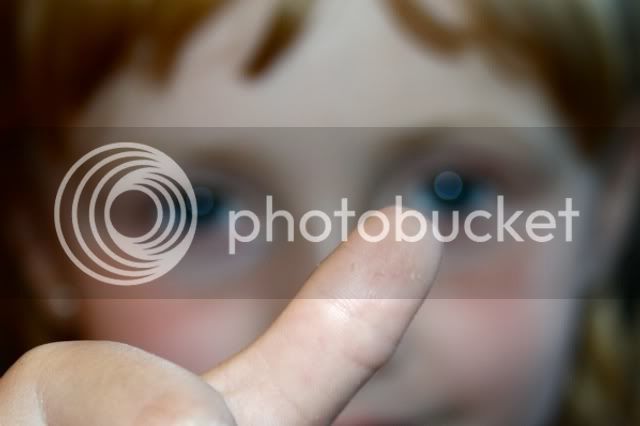 Well that was our morning.... on to some house work and hopefully we'll get out again before the end of the weekend!

Ryan, Averie and Luke
A

Right on! Great report. I have pretty much that same picture of my 6-year old son this past Saturday, rod between his legs holding on with both hands and all his might fighting an 18-inch smallmouth to shore.

Theirs nothing better than that Ryan.Cool fishing with the kids.Im the guy who talked to you on the dock at deer creek when you were there with your dad and family.it was nice meeting you.Always look foward to you and your posts with the kids .Take care Double H
C

its stories and pics like this that almost have me convinced to get the first bun in the oven...

congrats on a great outing with the kids.

R.O.C. (Radio Operator's Certificate)
Hey Ryan. Your pics blow the doors off the death box and wheelbarrow pics every time! Enjoy the kids while they are still small, before your second vehicle is never home, if you know what I mean. Keep them coming. 8D

"Rivers are living things, sometimes swollen and discoloured, other times thin and anaemic. Spend enough time around a particular river, you learn to read its moods, like a spouse reads a partner."

Gord Ellis ONTARIO OUT OF DOORS

Thoose are awesome pics. My girl has decided she is going to be a girlie girl and didnt want to come fishing last few times. I even tried with grampa card but she wanted to stay home. She is more into justin beiber now [xx(]:0

Staff member
"death box" - now come on Stick ... have you joined PETA
B

Save those pictures! Great report!

I know I gave you a quick reply on the "other board", but, here's a slightly more lengthy one, lol.

First off, it never ceases to amaze me the way Averie can get into fish. Second, I love the way she will hold any fish, even carp, at that age!!! You've done a great job turning her into a really great little "fishergirl", and, I'm sure Luke will be there really soon, too!
By the way, we still need to get out for that carp outing...that you, Dan, and I were talking about in spring. Or perhaps we do it with the kids, I'd love to see one or more of "the boys" hook into one of those beasts!

Hey Bob, always been a member of PETA. People Eating Tastey Aminalllsss! I just would much rather see Avery, Luke and Ryan's smiling faces with freshly caught finned critters than some of my poor chromers after they've been held in a cooler for half a day or more.

I'm back working in Tillsonburg with a feeder of the Otter at the back door of the shop and The Big O within a good cast away from the front door and I'm already starting to Jones for some chrome rockets with that hint of pink and blue.

Don't mind me though. The withdrawl will only get worse before it gets better, About mid September if the rains work in my favour that is.

"Rivers are living things, sometimes swollen and discoloured, other times thin and anaemic. Spend enough time around a particular river, you learn to read its moods, like a spouse reads a partner."