Couldn't pass on the nice day today.
So took the kids and started a bit late at 6:30 (too long of a break at Tim Hortons for Tim Bits).

It was expected the fish to be scattered all over after the last few days of strong winds....so wasted the first couple hours in search mode but once we found them....well everyone loved the action...

Pictures will give you an idea where the fish was hiding...

Anyhow...hope you enjoy the shots: 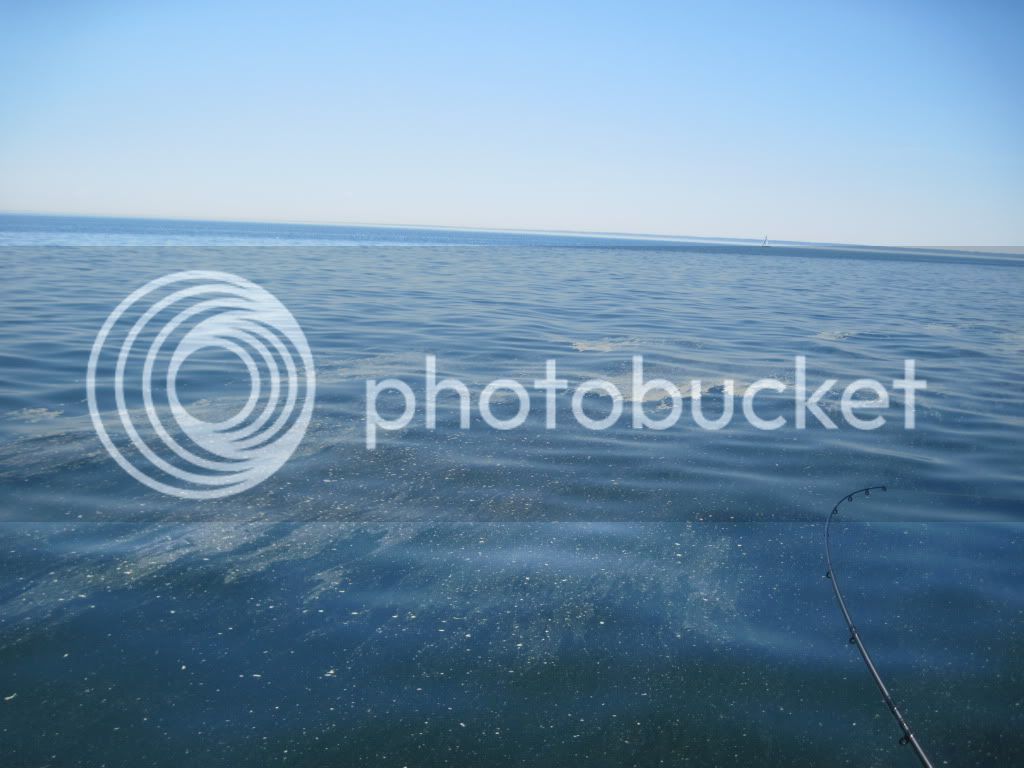 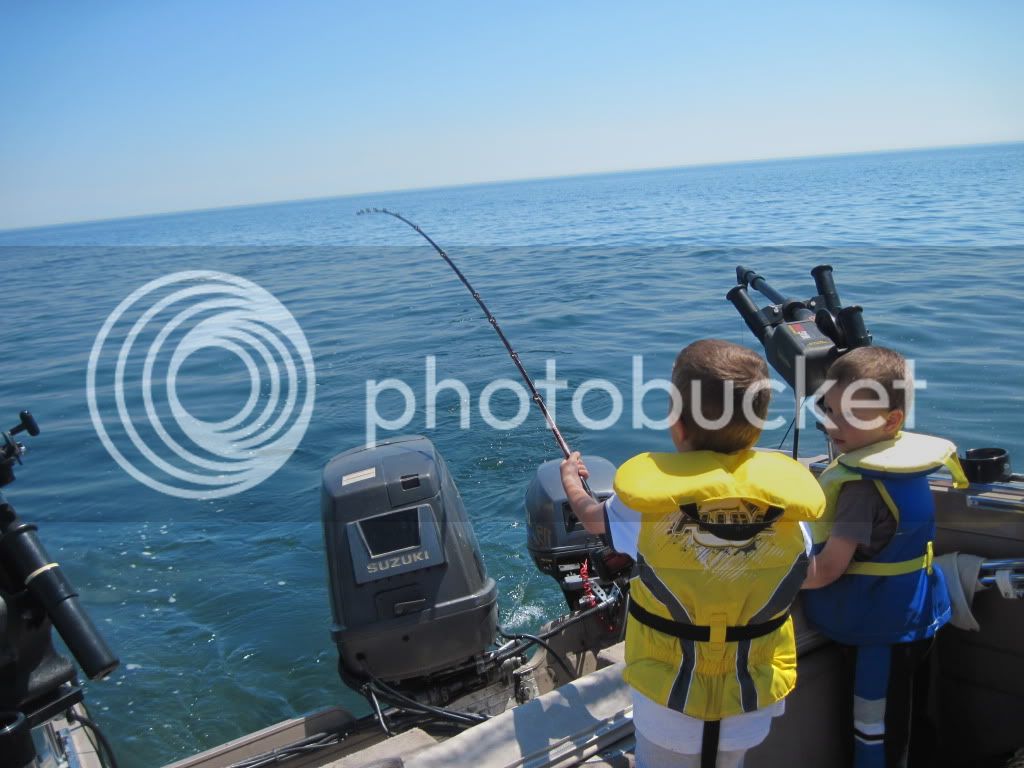 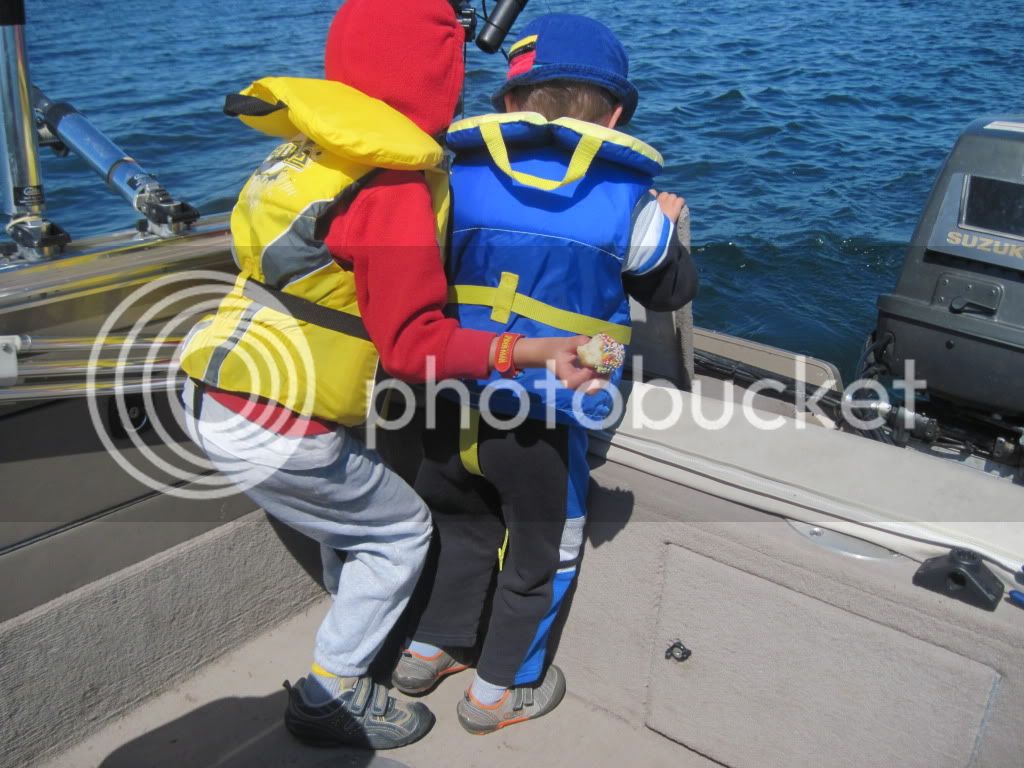 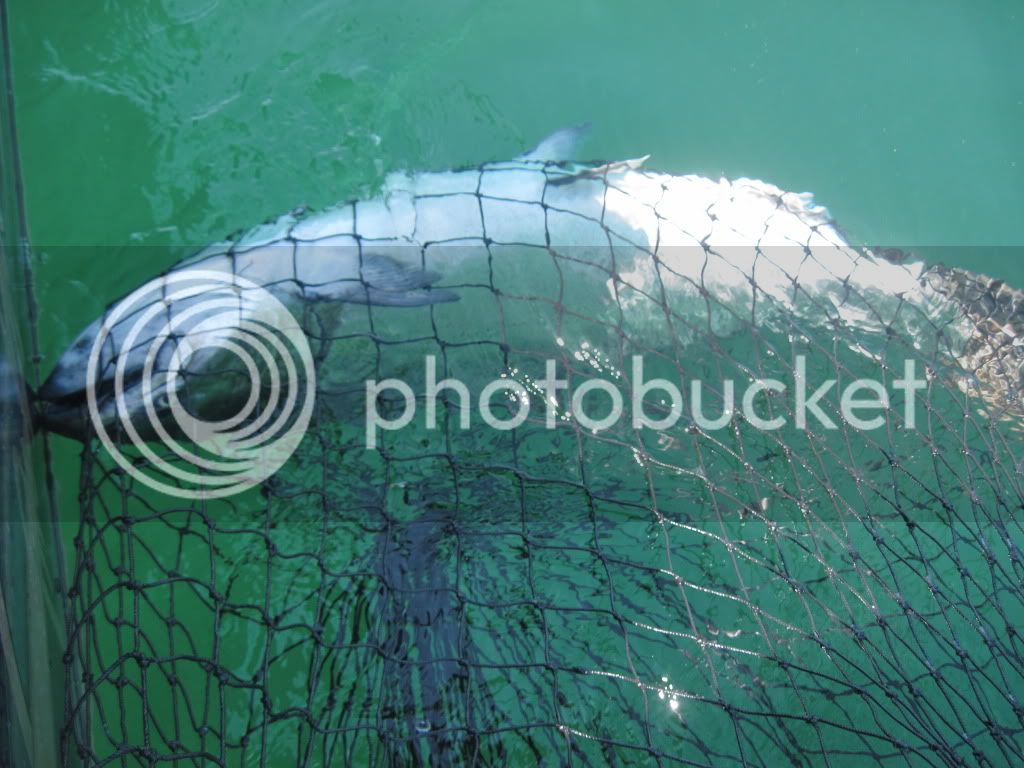 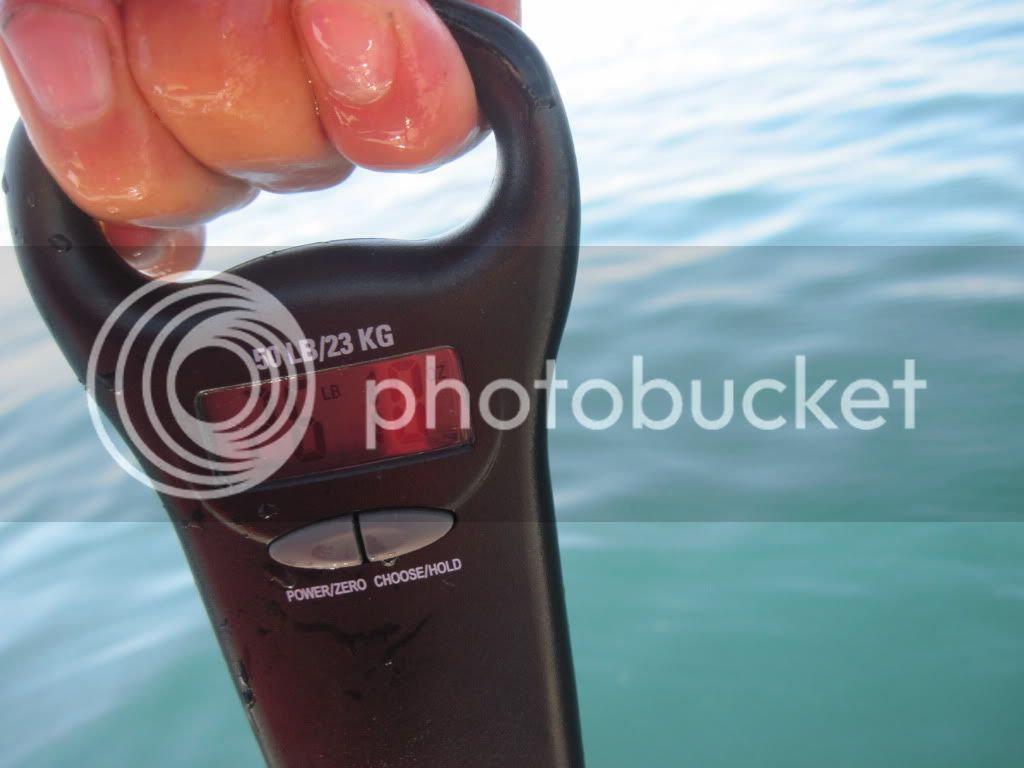 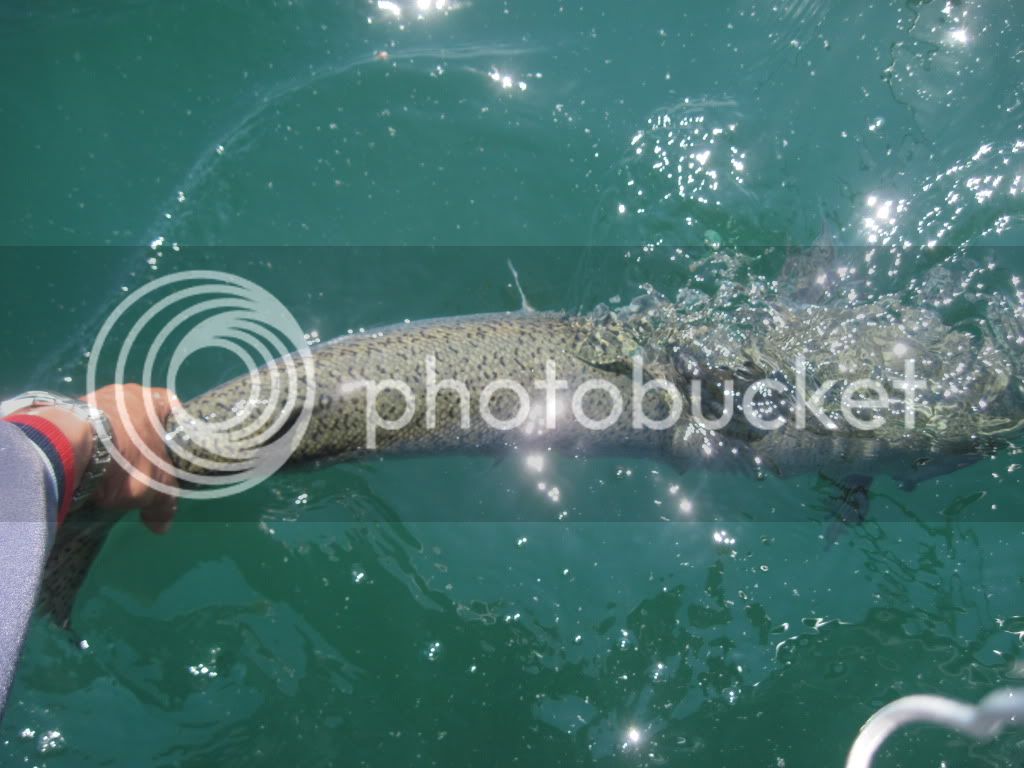 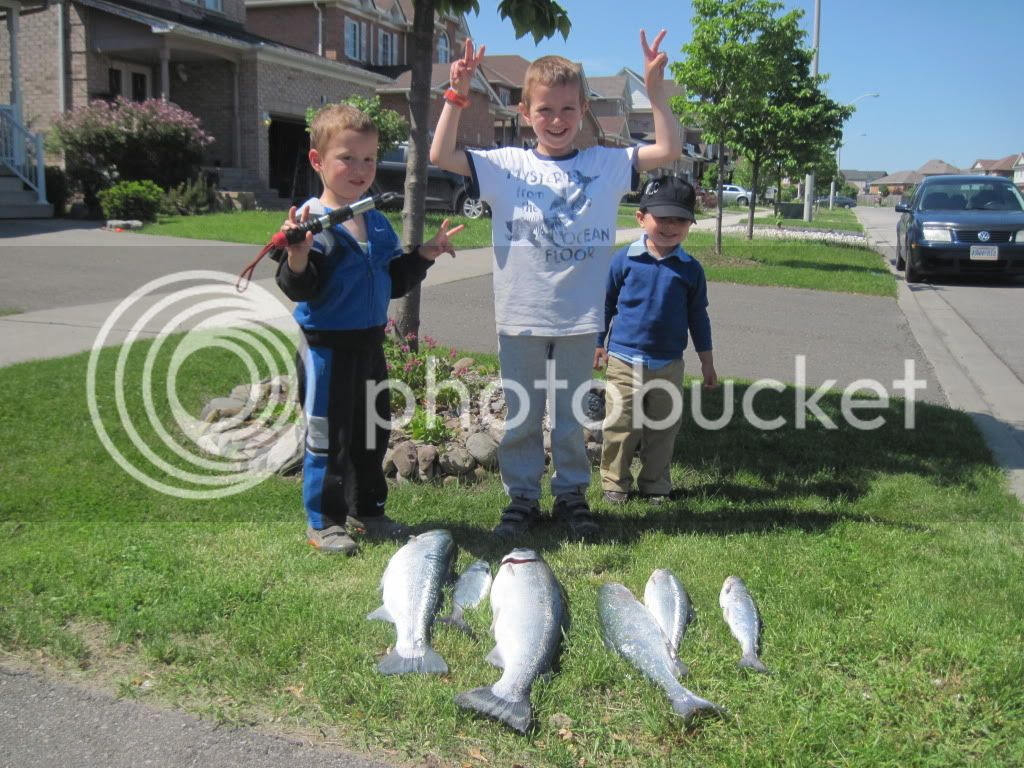 nice kings ice fisherman! i was out a couple of weeks ago on lake ontario fishing for kings for the first time and it was a blast. i checked the guide to eating sport fish before going and see that for chinooks up to 26 inches they recommend only eating 1 serving per month for the general population and 0 servings for the sensitive population. it looks like you catch a lot of salmon so i was wondering if you had an idea, why do so many people keep so many of these fish if they are this polluted? not knocking you by any means, ive just wondered because i always see the charter guys and other reports of people who bring home many big chinooks. do you/they freeze and eat them regularly or give them away to famiy and friends? i have tried to give some of my salmon that i caught a few weeks ago to people and when i tell them i caught it in lake o they want nothing to do with it? any thoughts? thanks

Well, it is a good question that everyone has their own opinion on...

If you look here:
http://www.ene.gov.on.ca/stdprodconsume/groups/lr/@ene/@resources/documents/resource/std01_078664.pdf

Now...I've spoken to many charters and they do clean and give a lot of fish to their clients...keep in mind...someone who eats couple fish per year (as they don't buy a charter every week) is much better than all those who go and buy their Salmon from Sobeys or A & P. The store bought fish is (in most cases) artificially grown and jammed with growth hormones to get bigger faster, same as the chicken you buy that grows from egg to your dinner table in 40 days) or the caw that is also full of hormones.
I much prefer wild Lake O. salmon than store bough hormones fed fish...

Also I give a lot of fish away to friends and neighbours on rotation basis...they all love it and take it - no problems....we've had same discussion with them....not to mention I've read recent research showing the benefit of eating wild fish much out weight the pollution issue.

My kids me and my wife all eat fish once a week...some times more...

Usually feed kids with the smallest fish...they catch it themselves and they like to eat it too....one small salmon (16-18/20") is plenty for a two small kids dinner.

Anyhow...I am a big believer in the moderation...eating fish has so many benefits especially for growing children that I am quite happy to have my kids with me almost every time and then to watch them eating their share8D

you gotta love it that they eat it?
Q

thanks for the reply ice fisherman. the area i was fishing in lake o was different thats my bad, where i was it was 1 serving up to 26 inchers, i was closer to toronto. i am fully aware of the aquaculture industry and its negative impacts on the environment and human health and the benefits of eating wild fish. it just shocked me when i saw 1 serving per month in this area compared to 8 servings of any size fish in lake huron, this is a remarkable different and just shows me how polluted lake o really is. the area you fish is clearly a little better. about the charter guys that makes sense most people do it once a year so would not be consuming much fish regularly. i seem to see a lot of people keeping huge 30+ inch fish though and the bioaccumulation in these fish would be high and it surprised me to see any of these ones being kept, but like you say everyone has their own opinion. do you keep many 30+ inchers yourself? the two we caught when i was out were 33 and 34 inches and 15 lbs which is an average king from lake ontario from what i hear?

I normally keep smaller fish for the table/smoker...say 3-7 lbs which are smaller than 30". And even smaller for the kids...
Sometimes neighbours ask me for bigger ones (up to 10 Lbs) , but again I don't give fish to the same people every time so their average consumption is well under the guidance.

icefisherman
where are u getting this info about hormones in aquaculture fish from. id be interested to find out[?] having been in the aquaculture industry i wasnt aware of this fact.
W

This is from Wiki, re cows at least
Bovine somatotropin (abbreviated bST and BST), or BGH, is a hormone produced by the cow's pituitary gland.[1] Like other hormones, it is produced in small quantities and is used in regulating metabolic processes. [1] Since 1994 it has been possible to synthesize the hormone using recombinant DNA technology to create recombinant bovine somatotropin (rBST), recombinant bovine growth hormone (rBGH), or artificial growth hormone. Monsanto was the first to develop the technology and marketed it as "Posilac" - a brand now owned by Elanco Animal Health, a division of Eli Lilly and Company.

The United States is the only developed nation to permit humans to drink milk from cows given artificial growth hormone.[2] Posilac was banned from use in Canada, Australia, New Zealand, Japan and all European Union countries (currently numbering 27), by 2000 or earlier.

In the United States, public opinion has caused a number of products and retailers to become rBST-free
I

icefisherman
where are u getting this info about hormones in aquaculture fish from. id be interested to find out[?] having been in the aquaculture industry i wasnt aware of this fact.

I am not an expert biologist and I don't want to hijack my own post.
But I can read/listen/watch the news...it is more than common knowledge how the chicken/cow/pigs etc. get to grow so fast so companies can make quick buck on your back....

My father grows his own chicken and it takes 9-12 months for a chicken from egg to food....and the chicken takes much longer to cook and is much tastier...
same apply to his pigs and cattle...
we all know how many chemicals, antibiotics, preservatives etc. given to farm raised animals in general...my father doesn't use any ;-))

But you've asked about fish....

I don't know how many times I've seen reports on the problems from farm raised salmon...
Anyone can Google and find tons of related info...

It only took a minute to find few sources:

And here is a quote you should read, just one of many:

...The general findings are shocking: the expert commission found that the total organic contaminants were consistently and significantly more concentrated in the farmed salmon as a group than in wild salmon. This includes dioxins and PCBs - both believed to increase the risk of certain cancers and to be harmful to the developing brains of fetuses and infants of women who are pregnant or breastfeeding. The average dioxin level in farm-raised salmon was 11 times higher than in wild salmon, and the average PCB levels were 36.6 parts per billion (ppb) in farm-raised salmon, versus 4.75 ppb in wild salmon....

You know how they get the red color in those farm raised fish right?

And just one more link:

Now as I said, everyone has their own opinion...this was mine.
You are free to have yours and eat or not eat wild fish.
I've decided for myself long time ago.