R.O.C. (Radio Operator's Certificate)
Took a friend out with me today as Icemaker is out of commission for a couple weeks.We set up in 57 feet of water South of Burwell,set the riggers down 35 with 150 leads with purple and black nasty boys and the dipsy's out 85 with Nascar K/O's.Took a few shots right away but nothing that hooked itself ,then we got a rainbow on.My buddy doesn't get out very often downrigging so I told him he gets the first fish.The rainbow went crazy and of course right behind the boat it threw the hook.Fish two off the dipsy,he grabs the rod,sets the hook starts getting it close to the boat and could see it was a nice walleye.Well he gets slack in the line and you guessed it,GONE.Rigger fires again and a big rainbow is dancing at the back of the boat.He has the rod in his hands and fighting the fish to just a little out of net reach,it takes off like a rocket,jumps in the air and again,GONE! I am laughing telling him the next rod that fires is mine.Rigger fires and finally we put a nice chunky walleye in the box.It was a tough day fishing,wind from the EAST,little choppy but my buddy did get to land several sheephead..LOL He enjoyed himself out there even though we only boxed one walleye and that is what is important,lots of laughs and an enjoyable day on the water. 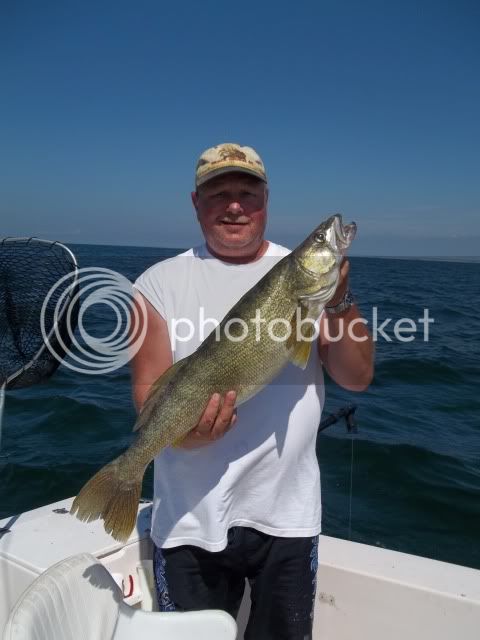 Very respectable eye you've got out there Kirk...yes East wind is not my preferred choice but better than sitting on the couch I guess8D
Were you marking lot of hooks and where was the thermocline?

sounds like a fun day. eyes dropping down a bit now.

R.O.C. (Radio Operator's Certificate)
Hey Ice,I agree with the east wind and yes it is much better than sitting on the couch..lol.We marked the thermocline down around 35 again yesterday.It wasnt as defined as on Tuesday but it was still there.yes we marked a lot of fish and lots of baitfish balls too with hooks all around.Thinking we should of been at 60 feet according to the other report...lol,oh well thats fishing!
quote:
Originally posted by icefisherman

Very respectable eye you've got out there Kirk...yes East wind is not my preferred choice but better than sitting on the couch I guess8D
Were you marking lot of hooks and where was the thermocline?

R.O.C. (Radio Operator's Certificate)
Thanks for the detail Kirk. I was wondering how well long leads would work off the riggers. It sounds like Friday wasn't the best of days for walleye fishing.
C

R.O.C. (Radio Operator's Certificate)
Anytime Arnie,I try to always put as much detail in as I can,you still got to get out there and catch them..lol.Yes Friday was a tough day fishing although there were a few guys reporting good catches.The majority were saying a slow day.As for the long leads,Tuesday seemed to be more productive with long leads than Friday but I still think the further away the better as we have taken almost equal shots as the dipsy's since lengthing the leads..